Preterm (PT) infants are at risk of developmental delays and metabolic sequelae as a result of inadequate growth; prompting neonatal care professionals to closely track an infant’s nutritional status throughout their NICU stay. Air-displacement plethysmography (ADP) is a well-accepted method for measuring body composition in adults, in part, due to its reliability and accuracy. However, the technique is less widely used in infants and its utility for infants has not been realized. Drs Kathryn Crowley, John Ladino and Marta Rogido, alongside Ruth Snyder and Cathy Sawtell, have launched a large-scale effort to use ADP to study growth and development in PT infants. They have shown that % body fat, measured by ADP, correlates well to body mass index (BMI) in the infant population overall. Their results also suggest that ADP is a more accurate method for assessing body composition in female infants or infants < 36 weeks gestational age.

Future studies will include using ADP measurements to assess whether body composition is affected by other important measurable factors, such as nutritional regimen, co-morbidities, or other standard care practices. 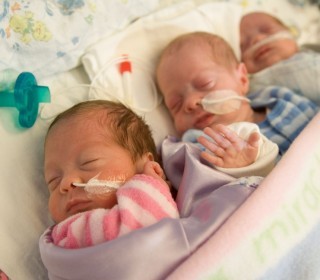